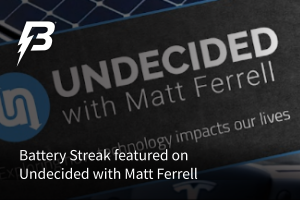 Better batteries are the key to unlocking countless technological and environmental improvements, from longer life cycles on smartphones to hybrid cars that can recharge in minutes instead of hours to a greener electrical grid.

Battery Streak is not a battery manufacturer. Instead, it makes material that allows lithium-ion batteries to charge faster while staying at room temperature with a longer battery life.

Charge and discharge rates of a battery are governed by C-rates. In Battery Streak’s tests, its technology can more than double the discharge power of widely used Panasonic batteries. When charging, it can deliver a 6C charge that captures 80% of the battery’s life in just 10 minutes, 12 times faster than other battery charging capabilities.

And, Battery Streak can do all of this without overheating the battery.

The average consumer wants batteries with higher power that charge faster, but the chemical process in charging causes the item to overheat, which could shorten the battery life and, in some cases, destroy the device.

Batteries with Battery Streak’s components have “pseudo-capacitor features,” Alpern said. A capacitor stores energy physically, in a form similar to static electricity, rather than chemically.

“It acts like a capacitor and it can distribute energy very quickly but it can also hold energy like a battery,” Alpern said.

The problem with capacitors is that they leak energy when not in use, which Alpern said isn’t an issue for a Battery Streak-powered battery.

Battery’s Streak’s material can also be used on an existing battery, which Alpern said is “a real big selling point for us.”

“You don’t have to retool, you don’t have to buy new equipment,” he said. “We’re going to use our slurry, our powders, and you can put it on your existing battery, run our material and the end product is going to have better life and operating capacity.”

Battery Streak is a spin-out of UCLA. The Office of Naval Research provided funding to UCLA to develop material that met certain energy profiles, and the Battery Streak technology was developed by professors Bruce Dunn and Sarah Tolbert. They partnered with current CEO David Grant, who built a company around the idea.

The team is still just getting started. Battery Streak has five employees and closed its Series A funding round last October, raising more than $5 million.

With that money, the company moved into its new facility in Camarillo in March, scaled up its operations and started its early manufacturing stage.

Battery Streak is now sending its early materials out to potential partners, allowing them to test it and ask for any specifications and re-tooling.

Alpern expects first sales of their materials to be ready by early 2023, after COVID-related delays messed up the timeline a bit.

Those potential partners include the U.S. Navy and Army, as well as makers of medical devices and power tools.

One day, Battery Streak hopes to see its material used in electric vehicles batteries, helping to improve the technology for wider adoption of green vehicles.

Battery Streak also plans on licensing its technology to U.S. battery manufacturers, as those companies can produce the powder material faster.

The Department of Energy is awarding grants from $50 million to $100 million for companies working with advanced battery technology. If Battery Streak were to receive one of those, it could become a battery manufacturer, but for now, the company is focused on making sure its production line is up by the third quarter of this year.

“I’m incredibly optimistic about the opportunities that we have only because, primarily because we are demonstrating a real technology that exists today that is exceeding everything else that anybody can put next to it,” Alper said. “We’re doing it. Nobody else that I’ve seen is doing it.”

About the Author: Battery Streak

The mission of Battery Streak is to bring Ultra Fast Charging to consumers and industry. Our aim is to reduce charging time for all electronic devices to minutes, not hours. Today, Battery Streak technology allows lithium ion batteries to charge at up to 15C with high energy density. We are always working on faster materials and our roadmap has Battery Streak fully charging electric cars in the time it takes to fill up a tank of gas.

Page load link
Our website uses cookies and third party services to ensure that we give you the best experience. Continued use of this site assumes you accept our policies. Continue
Go to Top